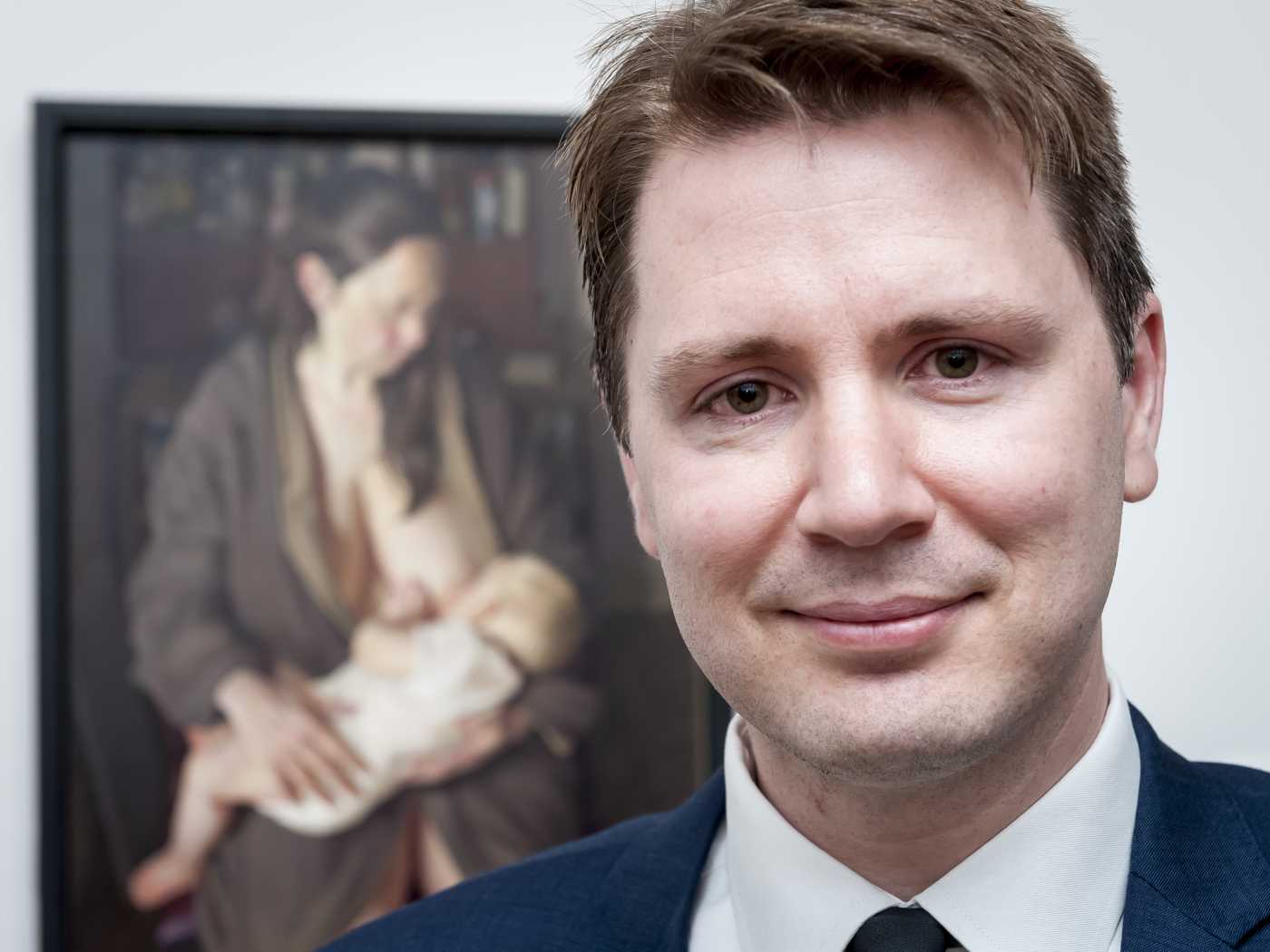 ‘The woman is tired. She is in love. Her life has changed forever. We know her.’ 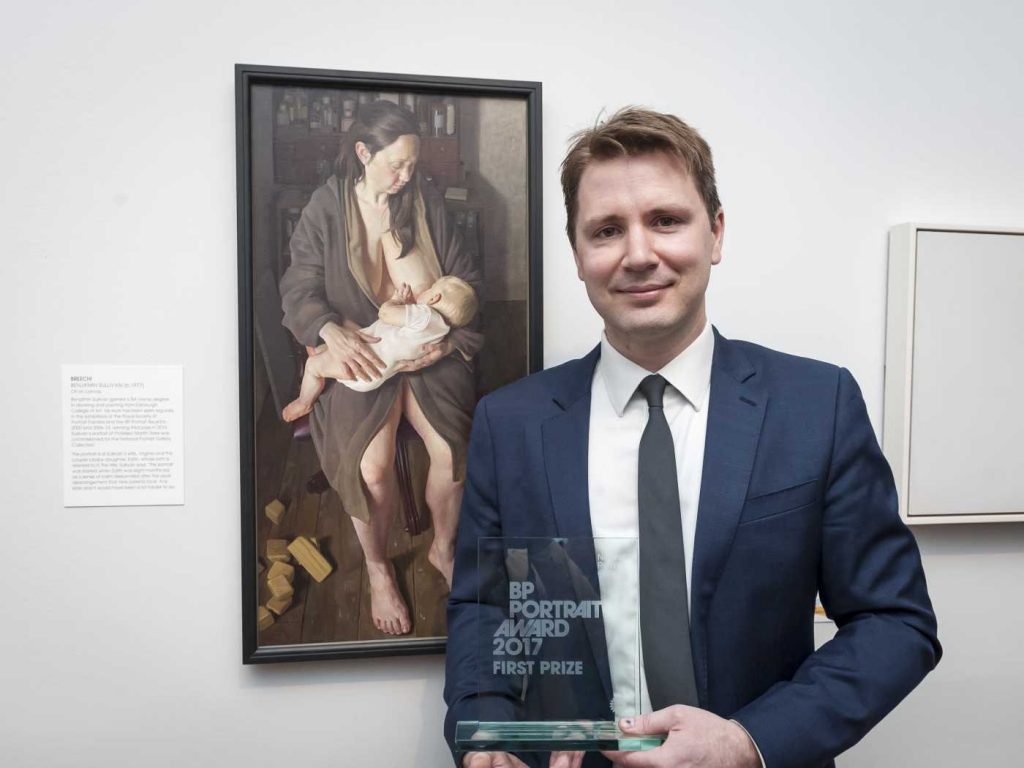 This is how judge and broadcaster, Kirsty Wark, described Breech!, Benjamin Sullivan’s portrait of his wife Virginia breastfeeding their eight month old daughter, which won this year’s BP Portrait Award.

Breech! was selected from 2580 entries, judged anonymously by a panel which included Kirsty Wark and artist Michael Landy. Benjamin has been selected a record thirteen times for the BP Portrait Award exhibition, and was awarded third prize for his portrait of the poet Hugo Williams in 2016.

As a writer, often grappling with vast quantities of words, I find it inspirational that a portrait can communicate so much – personality, emotion, story.

When speaking to Benjamin, I was really interested to understand how he achieves that sense of narrative and to also explore the similarities and differences with the writing process.

When speaking to Benjamin, one of the many interesting parallels I found is in how an idea gradually evolves over time. Breech! started as a drawing of Benjamin’s wife and daughter. Ginnie would frequently nurse Edie throughout the sittings. As a result, what started as a simple drawing evolved into this portrait.

Below, I ask Benjamin to tell us more about his work:

What was it that originally drew you to portraiture? Is there anything in particular you look to capture when you paint someone’s portrait?

I was good at it and I enjoyed it. I like the difference between faces so I don’t feel there is one thing in particular that unites all my paintings. I concentrate on what’s on the outside in the hope that this, in some way, conveys something about them. I think there is a truth to how people look.

I started, as usual, with a drawing, mindful of the fact that it may not be easy for the pair to stay still. I had no ambition beyond a drawing but it went well, and Edie seemed happy enough. It’s important to say that it wasn’t conceived as a breastfeeding painting per se. Indeed, it was a huge surprise to us when it was described in this way which I’m sure sounds strange! Nursing was useful to keep Edie calm when rousing, so this is how the position was decided upon.

Was it an idea you had beforehand?

I’ve done a few paintings of Ginnie over the years so it felt natural to mark this huge event in her and our lives. The aim was to show the power of love between mother and child which is an extraordinary thing to see and difficult (for me) to put in to words. It was painted when a sense of calm had descended after the normal disarrangement that new parents face.

Is it easier to paint someone you know well?

I don’t think it’s easier to paint someone you know well but there is more chance for the emotional power of the work to be elevated by that fact.

If a portrait is not a commission, how do you find your inspiration?

I often ask people to sit for me, but I don’t go out of my way to find inspiration. Happily it occurs in the normal course of events. A good example would be the painting of Hugo Williams whose poems I liked. We have a mutual friend, the poet Stephen Romer, and he introduced us at a private view.

Do you research your subject before you paint them or does the portrait develop through the sittings?

I do both. I’m doing a portrait of Margaret MacMillan at the moment. She is a very distinguished military historian so I got a few of her books. I like military history and they are very readable. But also, I hope the work has developed through the sittings. She is such a friendly, warm individual and I hope this comes through.

Can you talk through the process of developing a portrait?

I always start with a drawing on paper. I’d spend about three to five days on it perhaps, maybe longer if it’s very involved. I then transfer this to a canvas, resizing to fit the required scale. From there I would spend about six weeks painting. I would hope not to have to make any significant revisions – but some objects can come into the work at this stage.

Sometimes I plan more than other times but I do allow for things to develop if I feel the need. For a commission one would hope for about eight sittings whereas with ‘Breech!’ we lost count….days and days and days.

In your work I see a sense of a whole narrative captured in one image and of time passing, as though you are not just capturing one moment but many. How does portraiture lend itself to this?

Essentially this is the critical factor as to why the painted or drawn image works above photography in my opinion. Both you and the sitter come to the same spot on a number of occasions throughout a number of weeks with all the differences in mood and feeling that can quite normally occur in such a period. The light can be different, the season can be different.

How do other aspects of your work (not only the sitter) help develop the narrative within your work?

Most of it is explained by those paintings having been made in my studio. It’s a small space, much like a writer’s study I imagine, full of autobiographical references and personal objects. There is often little or no ‘set design’. Rather, the scene reflects what’s happening in the studio at a given period.

I might choose a smaller canvas as I think the smaller scale often enhances the intimacy. I’m not sure why, perhaps a larger work may look too showy and detract from the image. Having said that I also do large portraits and am working on two biggies now.

In a commission, objects or references to the sitter often come in, whereas the studio works are more autobiographical like I stated above.

Titles can also add to the narrative. The title ‘Breech!’ obviously refers to the birth and I thought the shock of this word (hence the punctuation) made for a stark juxtaposition with the calmness of the image. It was the word I had in my head throughout the sittings anyway.

There is such emotion in your portraits, not just capturing a likeness, more of a sense of that person and their personality. How do you achieve this?

So kind of you to say! I’m not entirely sure. You hear artists saying things like ‘I try to capture the persons soul’. I don’t know what this is, and I wouldn’t know how to go about capturing it. My method is to concentrate on the observable contours of the person – there may well be plenty of other things going on subconsciously.

I read that the sittings for your portrait of Hugo Williams were accompanied by a soundtrack of his favourite music – something I found really interesting. Can you explain why this was?

This was his decision as I painted him in his study in Islington. He is well known for being inspired by the music of his youth – rock ‘n’ roll, so I think he enjoyed playing some whilst sitting. I love Elvis too! If I’m on my own in the studio it’s Radio 4, all day everyday…

As a writer, I find I am always bringing my own experiences into my fiction – do you think you are doing this consciously or unconsciously when you paint someone’s portrait?

It’s good to know that this doesn’t only happen in fiction! A huge thank you to Benjamin for his time and openness.

Breech! can be seen at the National Portrait Gallery as part of the BP Portrait Award 2017 exhibition. You can find out more about Benjamin and his work here or follow him on Twitter here.

Beach bum yesterday in her element...#saltyhairdon

We couldn’t get out on our early walk yesterday

Tuesday again and another early walk in gorgeous S

An almost-heart shaped sea glimpse from our walk t

Daughter has inherited my love of eclectic ear app

I just love May and June - all the greenery in suc

Bowl of summer-salsa deliciousness after a long wr

Beach bum all the way...

Evening beaches are the most beautiful...

This error message is only visible to WordPress admins

Error: API requests are being delayed for this account. New posts will not be retrieved.